Roughly one in five of UW–Madison’s incoming in-state students is benefiting from Bucky’s Tuition Promise, making education at the state’s flagship much more affordable for Wisconsin families.

The initiative, announced in February, pledges to cover four years of tuition and segregated fees for any incoming freshman who is a Wisconsin resident and whose family’s annual household adjusted gross income is $56,000 or less — roughly the state’s median family income.

Transfer students who are Wisconsin residents and who meet the same income criteria receive two years of tuition and segregated fees.

The first students covered by Bucky’s Tuition Promise — 796 of them — began classes this September. They make up 18.4 percent of the total 4,318 new freshmen and transfer students from Wisconsin on campus this fall.

“After my dad passed away four years ago, we could no longer keep our family business open without him, so affording college was difficult for my mom,” says freshman Mackenzie Straub of Sister Bay. “Bucky’s Tuition Promise alleviated financial stress for my family.”

The 796 students covered under the commitment represent 65 of Wisconsin’s 72 counties. More than half (56 percent) are first-generation college students, meaning neither parent holds a four-year college degree. Nearly one-fourth (23 percent) are transfer students. The rest are freshmen like Straub. 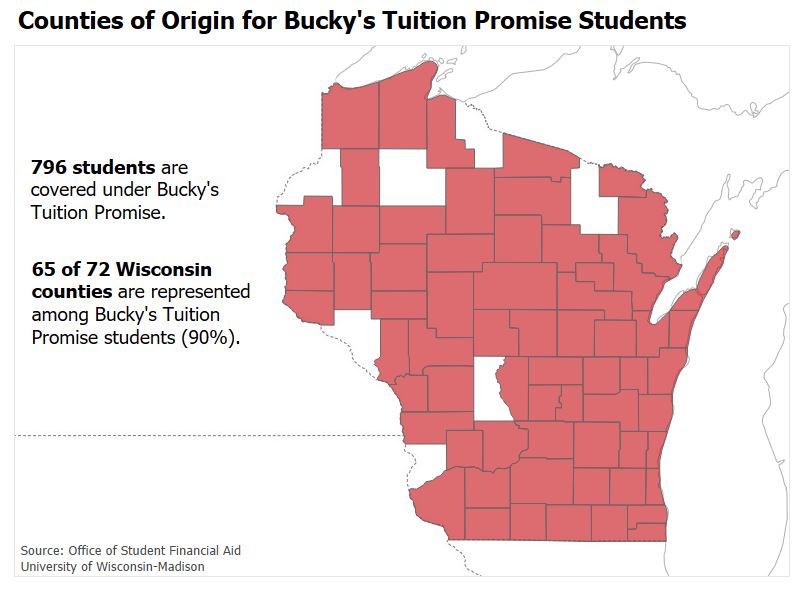 Funding for Bucky’s Tuition Promise is coming from private gifts and other institutional resources, not state tax dollars.

“We are fully committed to making UW–Madison accessible and affordable to Wisconsin families,” says UW–Madison Chancellor Rebecca Blank. “Our goal is to ensure that anyone who is admitted can afford to be a Badger.”

Qualifying for Bucky’s Tuition Promise is straightforward: It is based solely on one line from a family’s federal tax return. It is also simple: It is awarded automatically to eligible students who have completed the Free Application for Federal Student Aid (FAFSA). There is no separate application; the Office of Student Financial Aid simply notifies eligible students.

When Straub and her friends first started hearing about Bucky’s Tuition Promise, they thought it was too good to be true, she says.

“But I kept researching it and finally said, ‘Guys, look, I think it’s real.’”

In February, soon after being accepted to UW–Madison, Straub learned she had qualified for free tuition.

“It was so easy,” she says. “What’s great is that it really allows for students of all backgrounds and situations to receive an incredible education.”

To determine eligibility, only income is considered, not assets. That’s important in an agricultural state where many farm families may have high reported assets but low incomes, Blank says.

“We want this effort to provide access to families in smaller towns and rural parts of the state, as well as lower-income families in urban areas,” she says.

Bucky’s Tuition Promise is structured as a last-dollar award, meaning it fills in the gap between any private scholarships or grants a student receives and the full cost of tuition and segregated fees.

“The tuition promise more or less gave me the real ability to attend college,” says freshman Ethan Heckler of De Soto. “It also allowed my family to be a lot more relaxed, since we didn’t have to worry about whether or not I would be able to afford college.”

“It’s giving this wonderful opportunity to students who maybe didn’t consider UW–Madison before, even though I know they have what it takes to succeed there,” she says.

For more information on Bucky’s Tuition Promise, please see financialaid.wisc.edu/types-of-aid/tuition-promise/ or call the UW–Madison Office of Student Financial Aid at (608) 262-3060.