They gathered near the top of Bascom Hill, the hushed mood signaling the gravity of the occasion.

At a June ceremony, leaders of UW–Madison and the Ho-Chunk Nation dedicated a plaque that recognizes campus land as the ancestral home of the Ho-Chunk. The installation, called a heritage marker, acknowledges the circumstances that led to the Ho-Chunk’s forced removal and honors their history of resistance and resilience.

“It is time for this campus to be more intentional in telling this story,” Chancellor Rebecca Blank told the crowd, adding that the plaque is an important step in furthering a respectful, collaborative relationship with the Ho-Chunk Nation.

The plaque’s message is brief. But it addresses centuries of hard truths.

“For most non-Native people, the easiest way around these hard truths is to just ignore the real history of Wisconsin and the real history of the people who first lived here,” said Wilfrid Cleveland, who was completing his term as president of the Ho-Chunk Nation at the time of the ceremony. “My hope is that this plaque will cause them to dig a little deeper, that it will be a spark for them to learn about the Ho-Chunk people and the sacredness we hold for this land.”

During the 2019–20 academic year, the plaque will travel to prominent locations across campus to increase its visibility and to begin incorporating its message into the university’s teaching and learning. It will return to its permanent site on Bascom Hill in fall 2020. 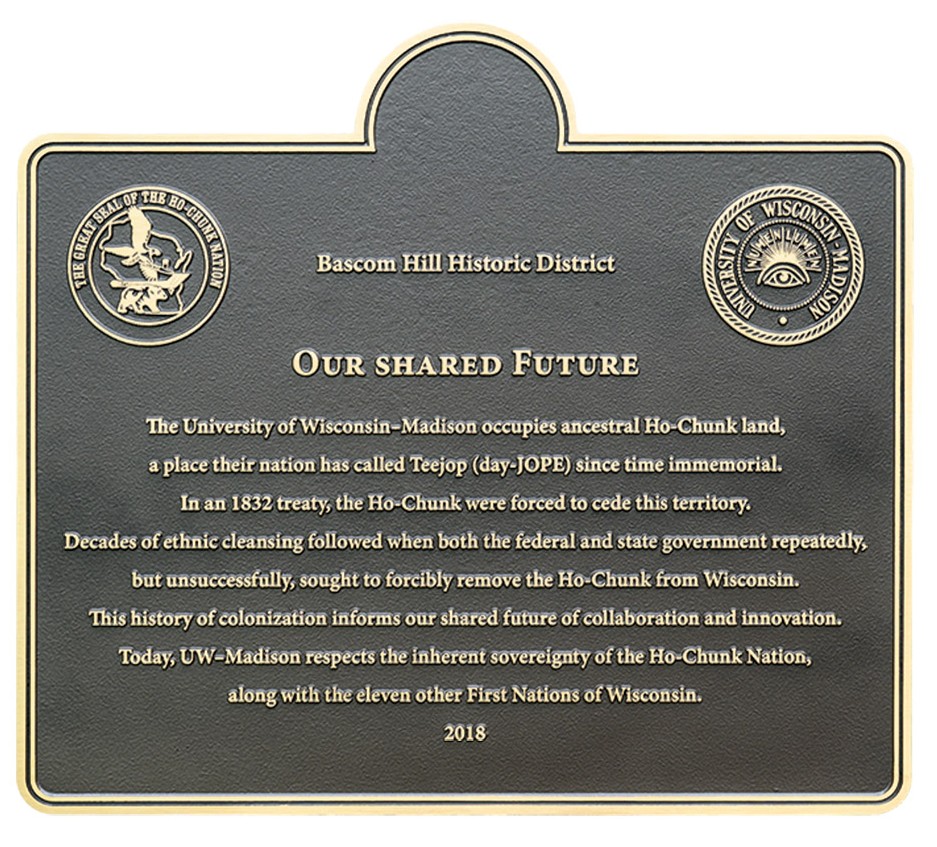 The plaque reads in full:

The University of Wisconsin–Madison occupies ancestral Ho-Chunk land, a place their nation has called Teejop (day-JOPE) since time immemorial.

In an 1832 treaty, the Ho-Chunk were forced to cede this territory.

Decades of ethnic cleansing followed when both the federal and state government repeatedly, but unsuccessfully, sought to forcibly remove the Ho-Chunk from Wisconsin.

This history of colonization informs our shared future of collaboration and innovation.

Today, UW–Madison respects the inherent sovereignty of the Ho-Chunk Nation, along with the eleven other First Nations of Wisconsin.

From the Fall 2019 edition of On Wisconsin magazine